Have you ever used the panoramic feature on your phone’s camera?

Typically, you’ll click like you’re taking a picture and then move the screen image in front of you from one side to the other. You’ll then end up with a cool picture that stretches wide from left to right.

It’s not the best photo option for everything, but it’s fun to use sometimes, like when you’re standing on the edge of the Grand Canyon and want to capture as much of the breathtaking expanse as you can.

Panoramic cameras in security surveillance are similar. They’re not right for every situation, but they sure great for certain applications.

Here are five benefits of using panoramic cameras as part of your video surveillance system:

A good panoramic camera can do the job of three or more cameras. This means fewer wires to run, fewer network switches to install, and ultimately less money out of your pocket.

In large spaces, the applications for panoramic cameras are endless. 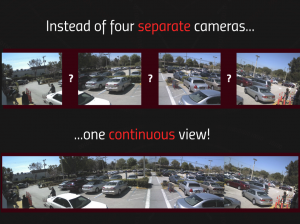 As a person or vehicle moves, you can keep track of them in one frame instead of having to bounce between multiple images on a screen.

This is more than just an issue of convenience. Sometimes, vital footage could get lost in the blind spots between camera shots. The alternative, of course, is to install more cameras that overlap to make sure you don’t miss any footage. But in that case, you end up installing more cameras than you really need.

Panoramic cameras provide a solution for all of this with one seamless view.

Perhaps you only have a few poles in a parking lot and can’t put cameras in every place you want them. Why not use panoramic cameras to cover the areas that otherwise would not be reached.

See the big picture while zooming in for details

A panoramic lens mimics what the human eye can see. As we view your surroundings, we usually don’t need to see everything our eyes can see. Instead, our peripheral vision helps guide us to what’s important, and then we focus in on that.

The same is true for a panoramic camera. You might not need to see every pixel of a wide angle image. But seeing it all at once allows you to easily find and zero in on what’s important.

With panoramic cameras, you can often do this with digital zoom functions. This helps you narrow your focus on a specific section of the image you want to view. As long as it’s a high-quality HD camera, the tighter shot should still have a high enough resolution to give you a good picture.

This saves you time in finding the specific footage needed rather than having to hunt through several cameras and images, especially in larger spaces.

At the end of the day, one of the benefits of panoramic cameras is simply the incredible footage they capture. Even if you could get the same footage using multiple other cameras, it wouldn’t look as effortless.

If you’ve never seen a panoramic camera in action, it’s worth checking out some demos. You might not have the Grand Canyon sitting behind your facility, but you might be surprised what you see with a panoramic camera.